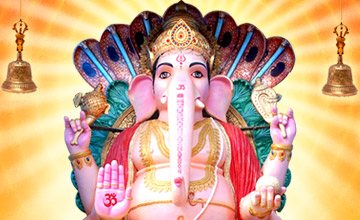 Lord Ganapathi, also described as Ganesha, is a very popular and revered Hindu deity and perphaps the most worshipped God in India. People mostly worship him seeking success in endeavors(siddhi) and intelligence. (buddhi). He also symbolizes wealth, wisdom, and happiness. He is worshipped before any venture or journey is embarked upon. Lord Ganapathi, having a curled trunk, one tusk partly broken, large ears, a massive body, four arms, and the radiance of hundreds of suns, elimintates all obstacles that impede success. 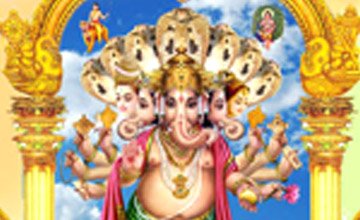 Lord Ganapathi is the elder son of Lord Shiva and Goddess Parvati, the universe's divine couple. He is the chief (Isa) of Lord Shiva's army and attendants, hence the name Ganesha. In the name Ganapathi, Ga denotes "knowledge," na means "salvation," and pati means "lord." He is known for removing all of the obstacles(vignas) in the path of progress and wellbeing of his devotees, therefore he is known as Vigneshwara. Due to this special power of Lord Vigneshwara, devotees lovingly shower him with prayers, sweets, and poojas at the commencement of every task and enterprise, thus becoming capable of completing the task without hardship or complexity. 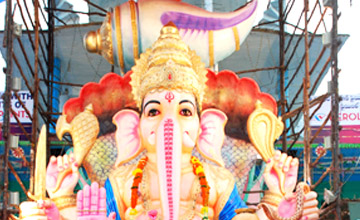 While adoring thee idol of Ganesha, a devotee observes that his head is that of an elephant, and the body of a human being. In his upper right hand he carries an axe(Ankusa); in his upper left hand he grasps a noose(Pasha). He is always smiling (Prasanna Vadhana). He may also be shown conveying blessings, dancing, or holding a lotus and mace. Seated below him, there dwells a mouse(Mooshika), which is his vahana, or vehicle. He ties a serpent around his stomach. His round figure signifies prosperity. 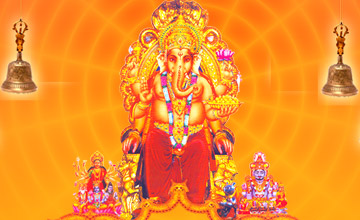 An ancient tale explains why Lord Ganesha is worshipped before any other deity prior to any other important event. One day Lord Shiva asked his sons Ganesha and Karthikeya to circle the world and return. Karthikeya hurried away on his peacock vahana. Instead, Ganesha walked around Shiva and Parvati three times. Ganesha explained that, to him, his parents constituted the world. Delighted and satisfied, Shiva granted him a blessing, affirming that no matter what the occasion or ceremony may be, Lord Ganesha should be worshipped before all other Gods. Another ancient story tells that Ganesha wrote the Mahabharata according to Veda Vyasa's dictation. When the sage asked Ganesha to write down the epic poem, the learned God agreed on condition that his pen should not stop moving until the story was completed.

Ganesh Chaturthi, the most sacred festival of Lord Ganesha, occurs in August or September. It is an important event in India and celebrated with fervor, particularly in the state of Maharashtra.